Bhutan: A carbon-negative beacon on an 8,000-foot hill

Bhutan is a tiny landlocked country that boasts the big reputation of being the first nation to be carbon negative. What can the Himalayan country teach the rest of us?

After the 2015 Paris Climate Agreement, all participating countries agreed to be carbon neutral by 2050. Six years later, many countries are still drafting their game plan for carbon neutrality. Fewer have embarked on the early stages of their plans.

One country was 32 years early in accomplishing not only carbon neutrality, but carbon negativity. That is the small mountain kingdom of Bhutan.

The Himalayan country tucked between India and China reached carbon-negative status in 2018. They were able to achieve this through policy, mentality, and favourable factors such as small population and their luscious and rough terrain. As of January 2021, they are still carbon negative.

It should be noted that impending challenges are facing Bhutan which threaten to make the country carbon positive emitters. Environmental threats loom as well. Bhutan’s officials recognise these threats and have envisioned solutions for these for 2030.

The fact that Bhutan reached net zero status and, despite impending environmental challenges, continues to draft bigger plans to remain as net zero contributors is something to which all countries can aspire.

Understandably, asking for countries significantly larger and more diverse than Bhutan in terms of industries and economies to be carbon negative is a tall order. However, the mentality of the Bhutanese people and government can be emulated across the globe – region by region, city by city – and we could see emission results that fall closer to the net-zero side sooner rather than later.

While the exact environmental conservation approach of Bhutan cannot be emulated by all, it is the mentality and the political and social will of Bhutan to be net zero contributors that can be imitated. 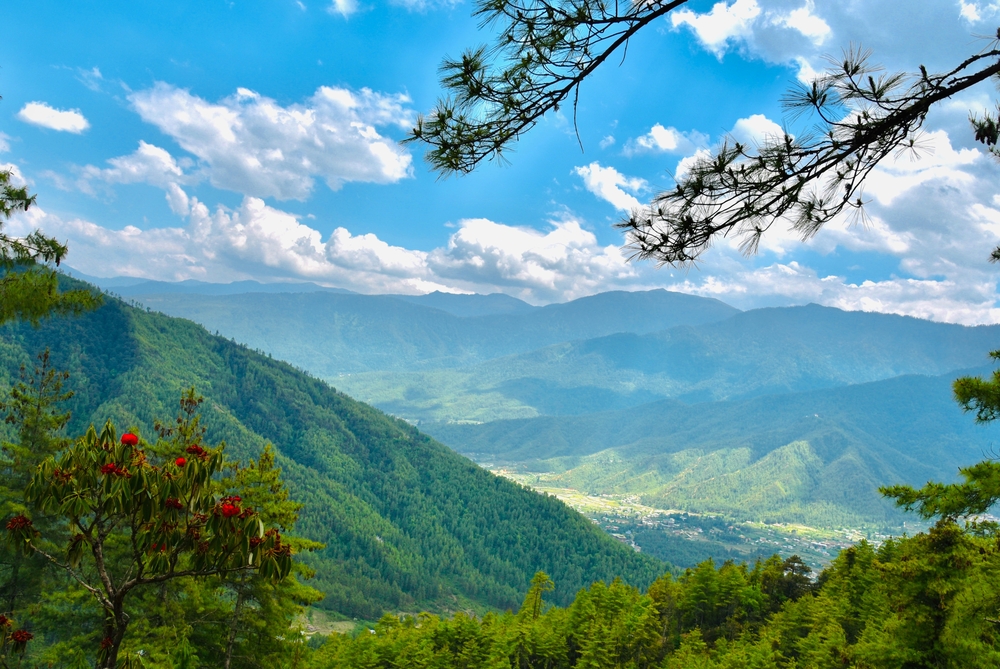 The climate in Bhutan

If you are looking to be healthier and get into better shape, you want to receive advice and a plan that is tailored for your needs and realities. Being told to simply “go on a diet” and “exercise more” is not very helpful. Our bodies respond to different diets and eating patterns, and not everyone has the time to spend two-plus hours in a gym or go for a 20k run. Some can get healthier by cutting out cigarettes and exercising just 20 minutes a day, while others need to calorie count and exercise for 60 minutes or more.

Like individual weight-loss plans for individual people, individual countries and regions need individual plans of action for reaching net zero targets. Nearly the entire globe has expressed the desire to reach net zero status, but the path to reach the target will be different for each one. Blanket statements such as “cut carbon emissions” are fine for bumper stickers and hashtags. Carbon reduction plans with substance are required.

The country of Bhutan took this approach. Bhutan identified its own local emissions issues and found ways to fix them. The country is able to be a “carbon sink” thanks to its dense forests. It removes about 7 million tonnes of carbon dioxide each year, while only producing 2 million tonnes as a country.

Bhutan’s decarbonizing trees are constitutionally protected. The country requires for its land to be 60 percent covered by its forests. In their move to further decarbonize, Bhutan axed mass logging, and they now only pluck out individual trees with cable cranes.

Others can follow suit and discover energy solutions that work for their land and its people. Scotland utilises the rough tides of the North Sea to be a world leader in tidal power production. Holland will make use of the Port of Rotterdam – the largest port in Europe – for its carbon capture project called Project Porthos. These are just two examples of how we can cut and capture carbon emissions. 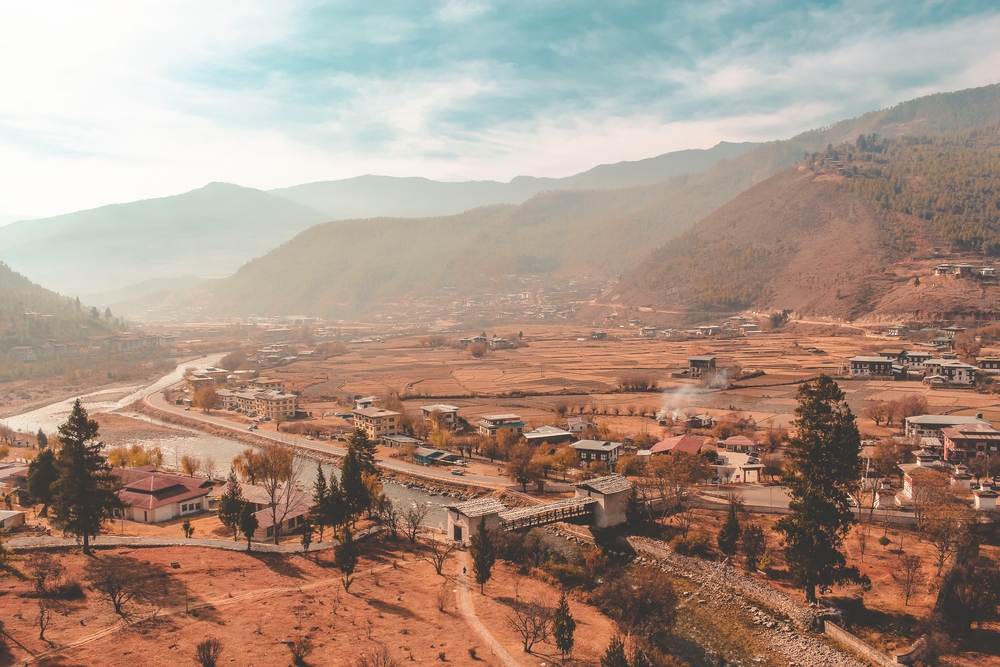 Bhutan is the first nation to be carbon negative

A total commitment from Bhutan

Easier said than done, but the move to a net zero target needs to win over the hearts and minds of all persons for it to be accomplished.

The constitution and the culture of Bhutan jive together to make decarbonisation a reality. As mentioned earlier, Bhutan constitutionally protects its primary carbon sink: its forests. The philosophy driving the carbon negative country plays a part as well.

Bhutan’s well-known Gross National Happiness (GNH) index is the measuring stick by which the country determines the well-being and collective happiness of the country. It is made up of four pillars, one of which is environmental conservation, and nine domains of happiness, measured by multiple indicators and variables.

Carbon neutrality and the means to reach it are compatible with the environmental pillar of GNH: protecting the environment contributes to the overall happiness and health of the people. It also satisfies the socio-economic GNH pillar since Bhutan provides free electricity to its rural farmers.

To decarbonise as a globe, we need to harmonise our support towards individual climate change efforts. The International Energy Agency (IEA) said in a June 2021 report that annual clean energy investment in developing countries must increase to $1 trillion (£860.7 billion) by 2030. Since emerging and developing economies make up two-thirds of the world’s population but only one-fifth of the global energy investment, assistance from developed countries is needed.

Harness the power of your backyard

Making energy sustainable, affordable, and secure at one time is taxing for regions and countries of all sizes. For example, resources like coal are affordable, but neither secure nor sustainable; solar and wind farms are sustainable and secure, but not affordable for many countries.

Dan Smith, Director of Energy Services at ClearVUE Systems, wrote about the energy trilemma, a three-pronged issue where the options to make energy altogether sustainable, affordable, and secure – a formula for reaching net zero targets. He argues that large-scale solutions are likely unable to present solutions for everyone. “The trilemma must be solved locally, whether that means by individual towns or states or nations,” Smith said.

Instead of racing to “keep up with the Joneses” and modernise their economy, Bhutan took an introspective approach to their energy needs. The country’s steep topography makes for powerful rivers – perfect sources for hydroelectricity production, and a great complement to the country’s environmental production and consumption.

According to Bhutan’s Intended Nationally Determined Contribution (INDC) from 2015, hydropower accounts for almost 100 percent of electricity generation in urban parts of the country and 94 percent in rural areas. Bhutan produces so much hydroelectricity that it can export excess energy to neighbouring countries, a gesture that offsets 4.4 million tonnes of CO2 per year, according to the same document.

Big lessons from the little country of Bhutan

Bhutan achieved what all 196 participating countries hope to achieve by mid-century. The country has played the cards it has been given – low population, luscious green environment, and a socio-political philosophy to drive it all forward – to reach carbon negative status.

Despite its efforts, Bhutan’s carbon emission rates will increase slightly over the coming years. The need to modernise and urbanise will add to Bhutan’s emissions output. Their government is aware of this and has plans to address it moving forward.

The key takeaway from Bhutan’s success, however, is the mentality of the country to continue to fight for its net zero targets. The country understands its needs and limitations, but they are putting their best feet forward toward every climate challenge.

It is the demonstrated forethought and motivation of Bhutan which all countries, regions, and even businesses and individuals can adopt.

The planet today has an atmosphere that is 1.1 degrees hotter than the Pre-Industrial Era. More worryingly, new analysis by...

One of the unique features of Northern Gas and Power’s business model is our after sales care. We ensure that...

With gyms reopening, now is the perfect time to learn about the added benefits of exercise on your health and...