Do Brits Even Know Where Malta Is?

I must admit, when I moved here, I had a vague idea…

By vague, I mean if I were to stand in Essex and I faced Glasgow, then pointed right-ish; I imagined it was somewhere in that region… So yeah. I knew exactly where it was…

I figured something out quite quickly when I made the jump over to Malta. I can do the same job I did in the UK, make good money, and enjoy 300 days of sunshine a year. It’s that simple.

Now I am settled.

I moved here and loved it. I’ll most likely not go back to the UK… Nothing against my home country, I just like the Mediterranean lifestyle. So much so, I have managed get myself an Italian girlfriend. Molto Bene!

I am not going to bang on about Residency cards, the ease of moving over (which it was), or that Malta uses the Euro. Or even that English is the most common language.

I am just talking about the lifestyle which Malta has provided for me.

Personally, during the summer (basically 9 months of the year here!), I finish work at 18:00 and can still enjoy a couple of hours of sunshine to chill by the sea. I head for a nice early dinner in the sun with the vast amount of choice that the restaurateurs here provide, or simply just walk up the Sliema promenade taking in the environment. It never gets old.

I also like the options Malta offers. We all work hard during the week and the weekends are ours! Malta offers you ferry trips to Gozo, Comino, Blue Lagoon, Sicily… A two-hour boat ride to the land of the Godfather and the ovens of traditional Sicilian pizzas… Madooonna!!!

You can charter a private boat for you and your friends to go around the caves, watch the dolphins flippantly hurdle the waves as you skip along the surface. It’s something quite amazing watching the Dolphins. I can’t quite explain it. You’d need to experience it yourself.

Me and my buddy decided to go fishing (never done it before), when his Dad came to visit from the UK. We chartered a boat, took some beers and set out as if we were on the TV programme ‘Deadliest Catch’. We were not. The first fish I caught genuinely gave me a battle. After a tiring encounter, I pulled it out of the water, and it was the size of a goldfish!

But it was something I had never done before. It was fun! And I spent a few hours out at sea on a boat with my mate, just because I could. This particular trip was only 70 Euros each.

In the summer, Malta attracts a lot of tourists. Nowhere more so than the capital, Valletta, and the gigantic cruise ships that arrive with endless visitors. These are tourists prepped with backpacks, tightly strapped Birkenstocks sitting over pulled up white sports socks and their cameras at the ready. They are excited. And so they should be.

Valletta is beautiful with a weighted mixture of modern and historic architecture. Full of great shops and amazing restaurants. Just make sure you get to the front of the queue at the Gelato parlours before the Americans do. There’ll be no ice cream left if you’re late! 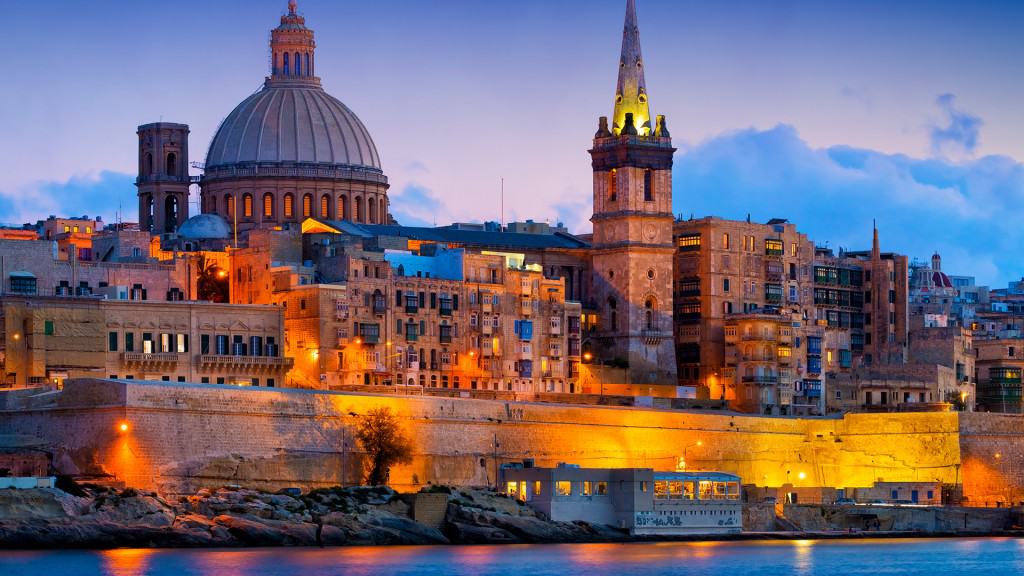 Being so close to Italy, there’s a direct correlation with Italian fashion in the ample independent shops in the plazas (Tigne Point, Bay Street) and city centres of Malta. This is then fortified with the high street brands available. It’s a shopper’s paradise, giving you everything you need!

The Maltese take pride in their appearance. Sunday is their day, and the restaurants are filled with cologne and lip filler. Something I am accustomed to, being from Essex…

It’s almost a home away from home, if you will.

Where do I start?

I am a foodie and I love eating out. With the food here being an eclectic mix of Mediterranean cooking, due to a long relationship between locals and the many civilisations who occupied the island over the course of history, it is quite divine.

On top of that, the variety of different restaurants here reminds me of London – from the amazing local restaurants of Marsaxlokk serving freshly caught fish, to the more internationally known Lore and Fitch. You can literally get anything you want here.

I would, however, say that I am yet to find a mind-blowing Chinese, but I have not tried them all.

Saying that, I have found an amazing Vietnamese and Thai place, so I am not complaining. The Blue Elephant in the Hilton is particularly nice when it comes to Thai food. Plus, I like the bridge over the Koi pond that you cross to get to your seats. We are all kids at heart.

There is a lovely cosy tapas place called La Vida where you can sit and enjoy fresh, tangy and colourful food that offers a warmth, not just in spice but in atmosphere. The chef comes over to say hello and even the owner sometimes joins you for a drink – all at a great price. Their deep-fried halloumi is something else! God, I love Halloumi. It’s the only cheese that says hello to itself in the mirror(!) (who even makes cheese jokes?)

What did the cheese say to itself after buying a new outfit…? Looking Gouda!

I’ll see myself out.

You mix with people from all cultures. One evening I was sitting at a table with a German, a Swede, a South African, a Fin, a Pole, an Irishman, and an Aussie. It sounds like the start to the worst dad joke ever. But we all sat, laughed, and drank together until the early hours. I had met them all only a month before.

Brits are accustomed to sayings that do not make sense to anyone else. I love sharing my British culture and learning about others. One evening, I was asked how I was doing. I immediately replied, “I am happy as Larry!”

I still smile about that to this day. Who actually is Larry, by the way? An undefeated Australian middleweight boxer from the 1890s?

I concentrate on bringing in talented sales professionals to our UK team here in Malta. We are growing as a business in Malta and have some great characters in the office. The difference in backgrounds is vast, which means we get along and deliver.

Here are just a few members:

I am looking to add to the team here. I’m open to speaking with people who are looking to bring their sales experience with them.

It is a big jump but why not take it? What is the worst that can happen?

When I left, everyone told me: “See you back in six months!”

Now I’m not saying I stayed here just to prove anyone wrong… But it added fire in my belly to stick it out when my mind did start to wonder if I had made a mistake.

I did not realise until I got here how many movies are filmed in Malta. I often sit and watch a movie and say, “Hey! That’s Malta”, with a sense of pride.

Blockbusters such as: Gladiator, Troy and Pirates of the Caribbean, Oscar-winning Munich with Eric Bana and that little known TV Series Game of Thrones were filmed here!

Game of Thrones: Visit Mdina where they filmed the much-awaited scrap between Jamie Lanaster and Ned Stark, where (spoiler) Ned got stabbed in the calf… Honestly, who stabs someone in the calf? They shot that in Mdina, also known as The Silent City. It’s an amazing place to get lunch with Fontanella’s offering you panoramic views of the island.

Gladiator: You can visit ‘The Pub’ where Oliver Reed had his last orders… 8 Pints, 12 Double Rums and a fair amount of Whiskey abruptly brought his filming to an end. RIP Oliver Reed!

Troy: Visit Blue Lagoon where Brad Pitt was confiding to his on-set mother. Brad Pitt in a sarong, anyone? Brings back the days of Beckham! If anyone other than Becks can pull it off, I imagine it would be Achilles… The waters of Comino/Blue Lagoon are so crystal clear that people try to check how many carats it is.

One thing that ties them all together; a traditional Maltese restaurant called Peppino’s where the owner has had the pleasure of feeding the Hollywood A-listers. They have signed pictures of all the stars that have eaten there with the dates of their nights meandering around the spiral staircase which leads up to the stone built dining area. If you book, then you can eat on the balcony with a picturesque view of the inlet… The food is beautiful, and it is reasonably priced.

The move for me was easy. I am open minded. I like meeting new people. And quite frankly, after thinking about relocating for ages, I mustered up enough courage to get the hell out of dodge.

I am not saying you should move without a plan. You should sort out the necessary arrangements. But what harm is there in looking?

I am the HR & Talent Acquisition Manager of NGP EMS, and I would like to talk to people who are thinking of moving abroad for work. We want to hire people with a desire to succeed and be successful within a sales environment.

William Bilton is our HR & Talent Acquisition Manager in Malta. Since joining NGP EMS, Will has assisted in growing the UK Sales and Tech team out in Malta. He comes from a Recruitment background, and now is adding another string to his bow by getting qualified and taking on the HR responsibilities and supporting business growth.

Orange is the New Green

“Smart Integrated Decentralised Energy” – or SIDE – is an innovative way of balancing energy supply and demand at a...

Energies France, Northern Gas and Power’s French sister operation, and part of the Global Procurement Group (GPG), has signed a...