You’d have been forgiven for blinking in disbelief if you had seen 25 ‘Santas’ on Gateshead Millennium’s blinking Bridge this week.

But that is what happened to passers-by when Northern Gas and Power’s people donned Santa suits, after donating £1,000 to Business Beats Cancer Newcastle, developed by the Cancer Research UK’s Newcastle Centre.

The bridge – often referred to as the Blinking Eye – hosted 25 suited and bearded Santas, who gathered to raise awareness of the campaign, and to raise money for the charity.

The Gateshead Quays-headquartered B2B energy specialist – part of Global Procurement Group – is donating to a range of charities throughout the festive season, to support communities and families to ensure they experience a happier, healthier Christmas period.

In addition to its donations to Business Beats Cancer Newcastle, the energy specialist is giving back to numerous charities close to its people’s hearts. It has again supported Metro Radio’s Cash for Kids as well as several food banks in the regions where it operates. 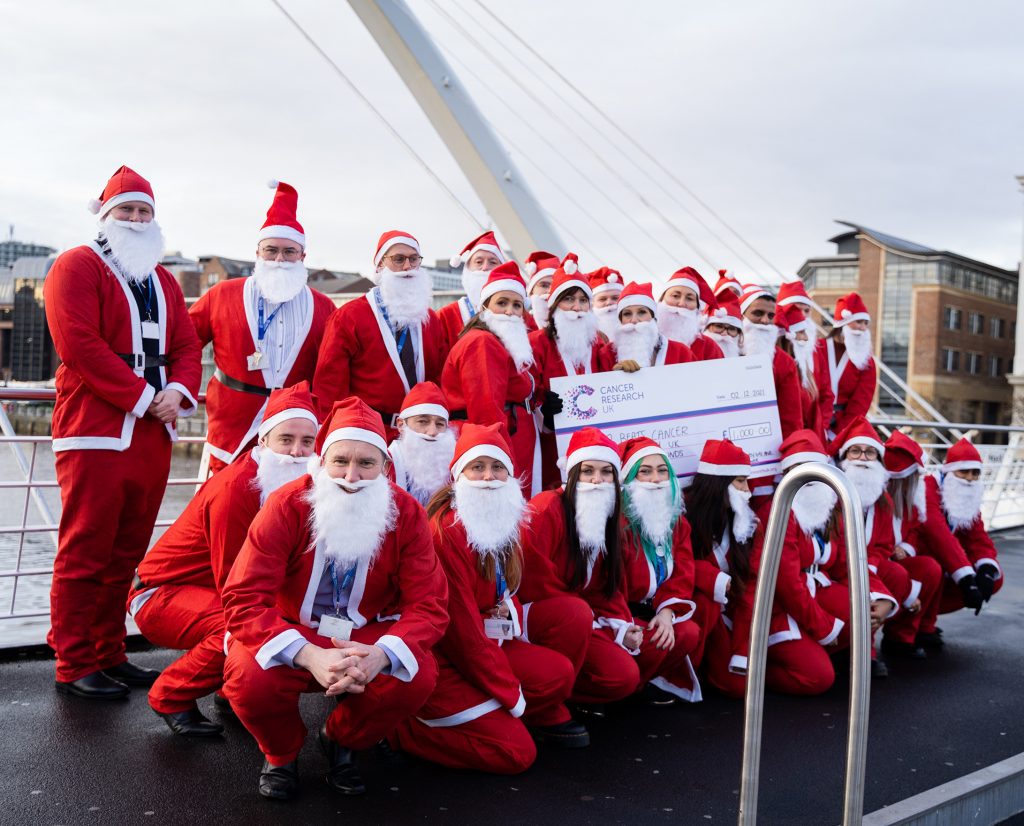 Business Beats Cancer Newcastle is an exciting initiative launched in 2021 which aims to bring the North East business community together in the fight against cancer, with all funds raised staying in the region. It has been developed by the Cancer Research UK’s Newcastle Centre.

The ‘Santa Beats Cancer’ campaign encourages companies to swap their traditional Christmas jumper days for the chance to dress as Santa, raising funds for lifesaving research.

Cancer Research UK delivers world-leading research nationally that accelerates the transition of lab-based discovery to the clinic, for the benefit of people affected by cancer. Each year the charity funds around £5m of lifesaving research in Newcastle.

“It’s great to be in a position to support charities that have such an impact in our communities. Santa Beats Cancer is a fun, festive initiative which is at the heart of its community, and we hope it sends out a positive message to people affected by cancer in the region, as well as supporting in the battle to beat it.”

Thanks to its supporters, Cancer Research UK’s work into the prevention, diagnosis and treatment of cancer has been central to progress that has seen survival in the UK double in the last 40 years. The charity’s ambition is to see three in four people survive their cancer by 2034.

Sam Moralee, Cancer Research UK Relationship Manager for the North East & Cumbria, said: “We really can’t thank everyone at Northern Gas and Power enough for getting involved with our first ever ‘Santa Beats Cancer’. Cancer is relentless but so are we.

“Our scientists in Newcastle are working harder than ever to bring forward the day when all cancers are cured.

“This past year proves, more than any other, the value of research and what can be achieved together. That’s why we want to harness the ‘people power’ of our incredible supporters like Northern Gas and Power.

“So, whether they donate, fundraise, volunteer at our shops or pledge to leave a gift in their Will – with the help of people in Newcastle we believe that together we will beat cancer.”

Anyone keen to donate to support life-saving research, can do so here cruk.org/donate

Founded in 2013 by CEO Fokhrul Islam, Northern Gas and Power is the UK’s largest energy consultancy by customer volume. The group manages over 31 TWhs of energy, enough to power the country of Ireland for a whole year. Specialising in energy procurement and energy management technology, NGP, alongside its parent company Global Procurement Group, supports 22,000 customers and employs over 700 personnel worldwide across three continents.

Following successful ventures in the energy procurement and energy technology markets, the Group has evolved to offer new propositions to the UK energy market. The group has released proprietary technologies that revolutionise business energy switching and business energy management.

Our vision is to drive a transformational change in global energy behaviour, helping companies decarbonise towards a greener, cleaner business landscape.

How businesses can mitigate against energy price rises heading into 2022

The UK has experienced soaring energy prices since March 2021. Prices for power reached as high as £128 per MWh...

Good COP or Bad COP? A Roundup of COP26

The recent climate conference in Glasgow has certainly exceeded some expectations. Hopes of limiting global warming to 1.5C remain alive,...