What fuels your electricity?

Why it is becoming important to understand your electricity supplier’s fuel mix.

When you contract an electricity supplier to power your small business, you’re normally concerned about two things:

But have you ever thought about your supplier’s fuel mix?

This may have never crossed you mind. However, an increasing number of consumers now pay attention to how their electricity is generated. In particular, consumers now consider the impact made on the environment. Your choice of electricity supplier may indicate how you want your electricity sourced.

In this guide, we will discuss what is fuel mix, how and why it is disclosed, and its implications on you as a consumer. We’ll then break down which energy sources suppliers primarily use to generate your electricity.

What is fuel mix?

Fuel mix is the ratio of different fuels and energy sources that is used to generate electricity.

Electricity suppliers will often use a mix of different energy sources – gas, nuclear, coal and renewables – to produce the electricity at their power stations that is then pumped into your small business’ premises.

How and why is it disclosed?

Your electricity supplier is obligated to disclose their fuel mix to the public. This is a requirement enacted by the Electricity (Fuel Mix Disclosure) Regulations 2005 (SI 2005 No. 391).

The impact of these fuels on the environment must also be published, typically recorded in the amount of carbon dioxide emitted for each kilo watt hour (kWh).

Fuel mixes are calculated as a percentage. Resources such as ElectricityInfo.org or the UK Government provide yearly disclosures on their websites.

Why does it matter?

For example, environmental changes could affect the output of electricity for some suppliers. Reduced supply of renewables require wind- and solar-reliant suppliers to compensate the lack of output with fossil fuels, affecting Britain’s net-zero emissions targets. Current events like the Suez Canal blockage in late March 2021 greatly affected the UK’s gas supply mix at that time.

Of course, nature is an unpredictable phenomenon. However, you can be prepared for changes in energy production by keeping tabs on industry news. Being aware of your business electricity generation has implications on how you get and pay for the energy. Understanding and anticipating changes in the industry may help inform your decision on which supplier to choose.

The table below shows the disclosed averages of fuel mix for all electricity suppliers as of March 2020, as reported by the Department for Business, Energy & Industry Strategy.

What fuels fuel your electricity supplier?

The fuel mix figures reported below were sourced from each of the energy suppliers’ disclosures, published on their websites. 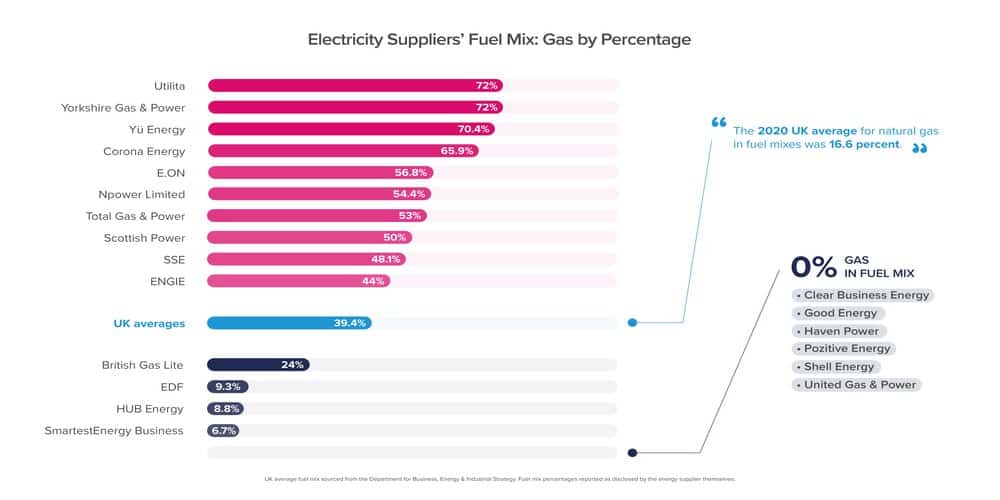 By far the leader in using nuclear resources for their fuel mix is EDF Energy. Two-thirds of their fuel come from nuclear, with renewables complementing most of the final third. British Gas Lite use 24 percent nuclear energy. 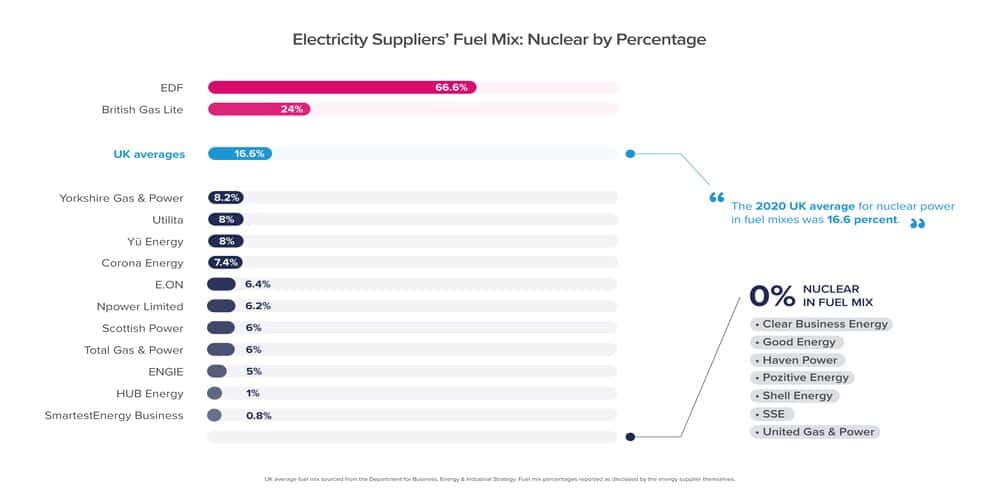 With renewables coming to the forefront in recent years, there is little surprise that many electricity suppliers across the UK push to be predominantly renewable-reliant.

There are a handful of other electricity suppliers whose fuel mixes mostly include renewables. SmartestEnergy, HUB Energy, British Gas Lite, Engie and Total Gas & Power use a healthy mix of renewables – 91, 89, 76, 44 and 32 percent, respectively.

With the UK national average use of coal lying below 4 percent (a huge drop from 70 percent in 1990), it is difficult to find electricity suppliers who use a significant amount of coal in their fuel mix. Utilita, npower, Engie, Scottish Power and SSE are the only companies who use an above-average percentage of the fossil fuel in their fuel mix. Utilita disclosed that they use 6.3 percent coal.

The UK plans to close all coal-fired power stations by 2025. 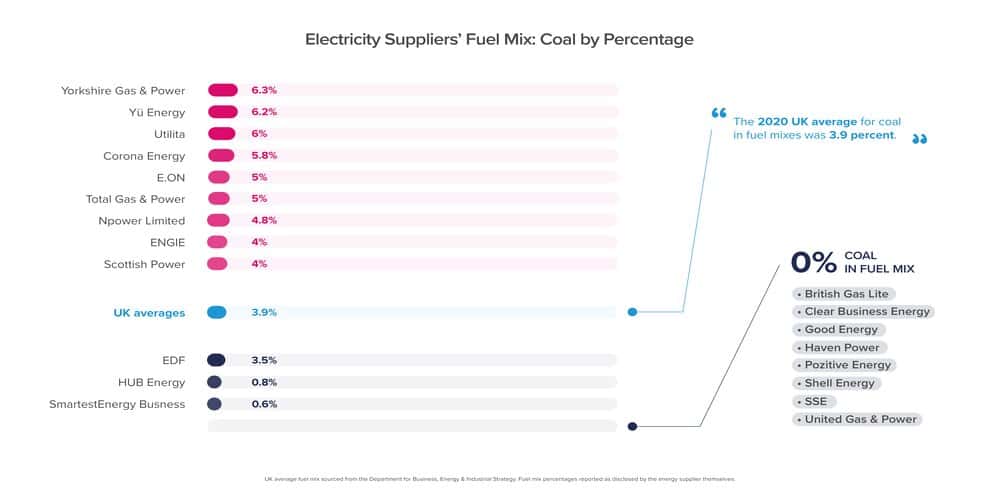 Resources classified as “other” refer to other renewable sources such as biomass, hydroelectric, geothermal and tidal. 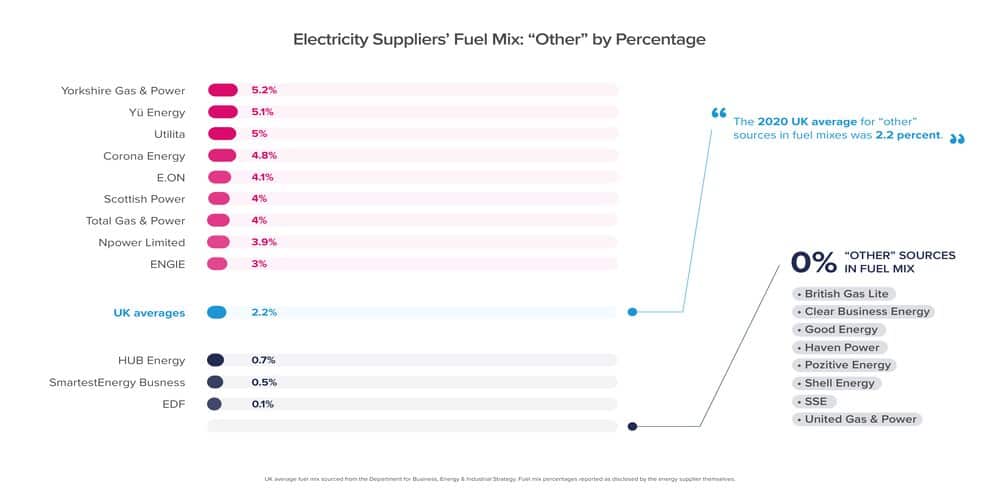 Energy suppliers listed towards the end alphabetically are leaders in using “other” renewable energy sources. Yorkshire Gas & Power, Yü Energy and Utilita each use over 5 percent of other resources in their fuel mix. Corona Energy, E.ON, Scottish Power and Total Gas & Power have between 4–4.9 percentage. The national average is 2.2.

If you’re ready to start saving on your business energy costs, visit BusinessEnergyQuotes.com.

To start comparing and shopping for the best business energy quotes, all you need to do is enter your postcode and current contract end date into BusinessEnergyQuotes.com. Our site will deliver a comprehensive list of deals for you to consider. Our team handles the switching administration on your behalf, saving you money and letting you get back to business.

For your hassle-free Business Energy Quote, go to BusinessEnergyQuotes.com

Question: What is the world’s Carbon Footprint?

The Government’s plans to embed financial reporting into its long-term environmental sustainability strategy continue apace. Since 1 April 2019, the...

Spotting Inefficiencies in your Energy Profile

An Energy Management System (EMS) is a versatile and powerful tool which helps visualise energy consumption and target areas for...